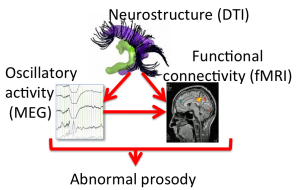 We have adopted a multi-stage model of prosodic processing. Prior fMRI suggested that affective prosodic identification utilizes a reciprocal temporo-frontal neural circuit  comprising the cortical and subcortical Regions of Interest (ROI’s). In this study, we are employing multimodal neuroimaging (EEG, MEG, fMRI, & DWI) to examine the tempro-frontal reciprocal model in real time, as well as examining the effects of structural fiber pathway integrity on functional integration. A reciprocal activation pattern and connectivity within a 9-component prosody network was observed. 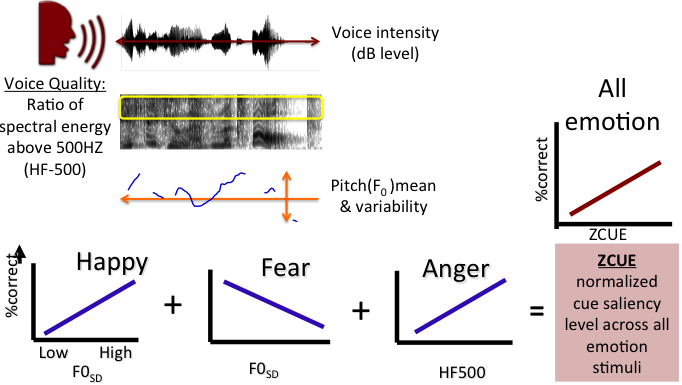 Acoustic features such as decibel level, pitch and pitch change as well as spectral content. serve a cues for prosodic intent.

For example, using our stimuli we found positive correlations between pitch variability ( fundamental frequency (F0SD) and the probability of recognizing happy utterances correctly. decreasing  pitch variability was inversely correlated with correctly identifying fear, while correctly identifying anger was correlated with increased high frequency energy meandered as ratio of energy (power) in the stimulus above 500Hz. with  example. to examine the richness of these emotion-specific cues across all emotions we can calculate the z-transform of the cues within each emotion and derive a cross emotion cue salience value (ZCUE)

First, the stimulus undergoes low level auditory processing. We extract cues like pitch, intensity, and the spectrum and integrate them together in an attempt to evaluate the meaning of the cues and attribute the emotion. To complicate things further, this can be both a top-down and bottom-up process. A disruption could occur during any point in this process to impair the ability to accurately perceive and evaluate prosodic cues. We hypothesize that stimuli with greater cue saliency will be more easily recognized and thus will result in increased facilitation of feature extraction and integration, while lower cue saliency may require more evaluation and result in top-down modulation. 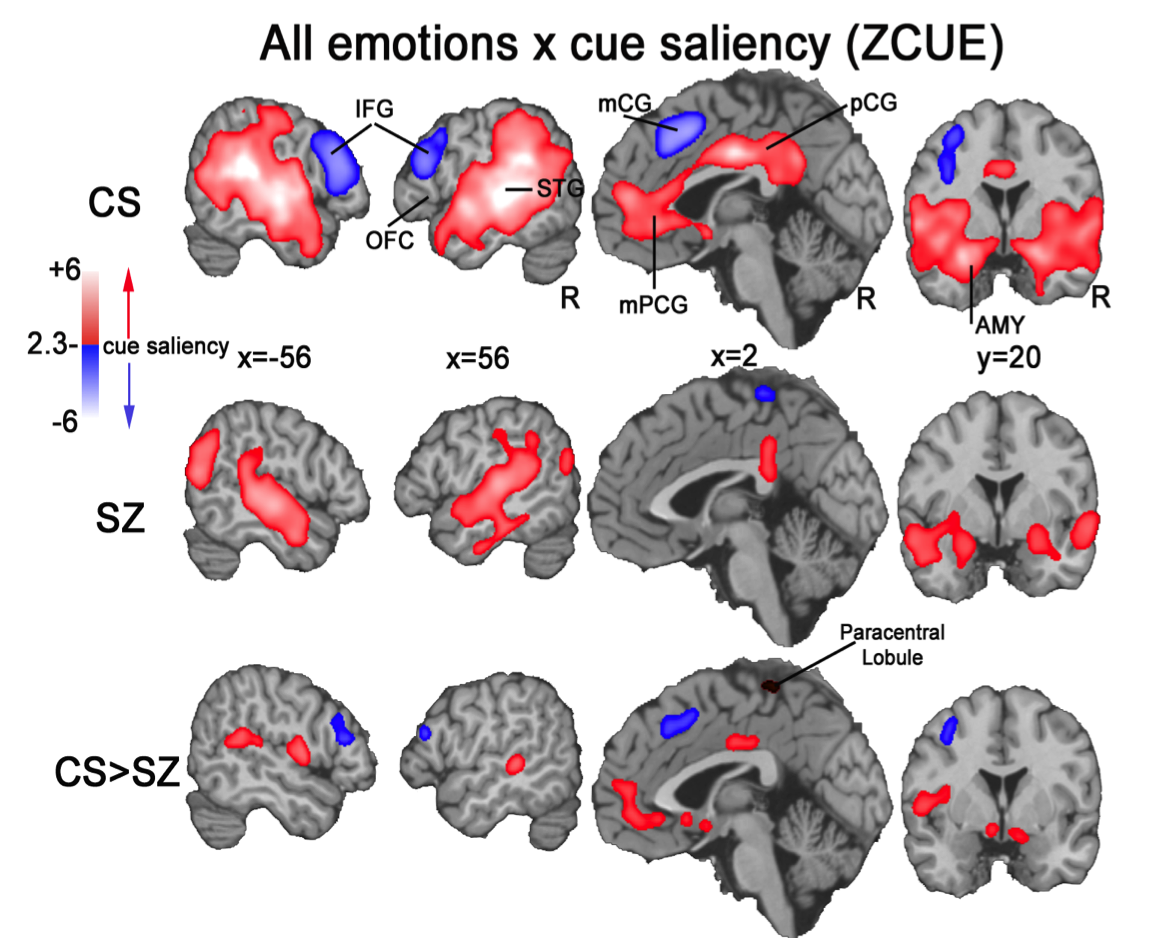 The Multimodal study seeks to first extend our explorations of the effects of CUE-salience modulation on the dynamics of the temoporo-frontoal reciprocal network, to5-dimensions Time, space and time-frequency space. Thus for each node or ROI within our network we seek to identify time and frequency of cue salience modulation or a tfROI 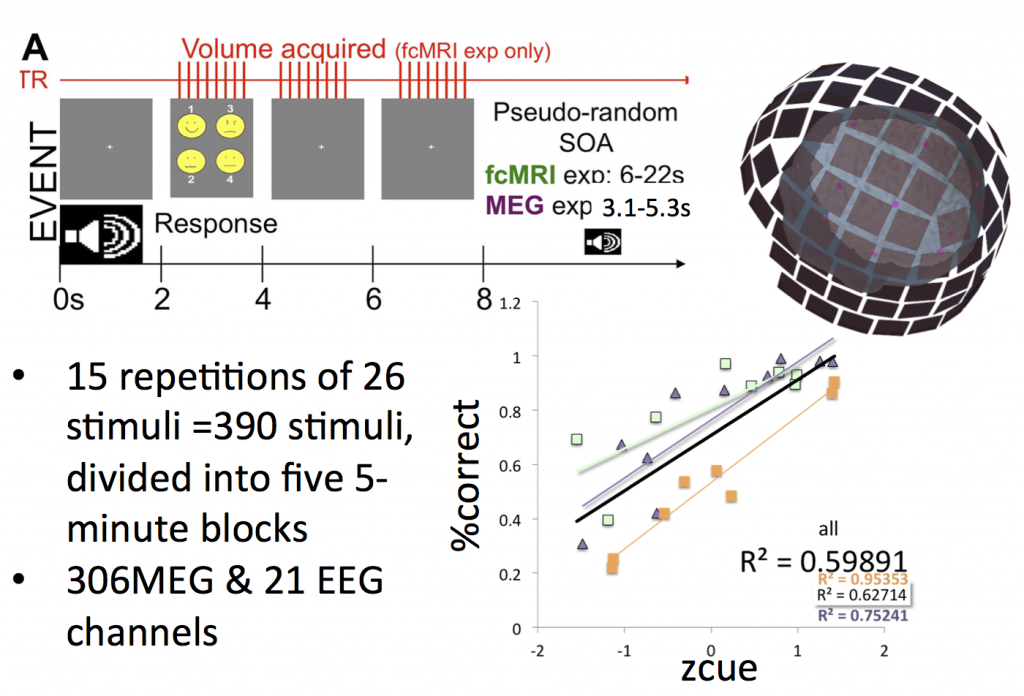 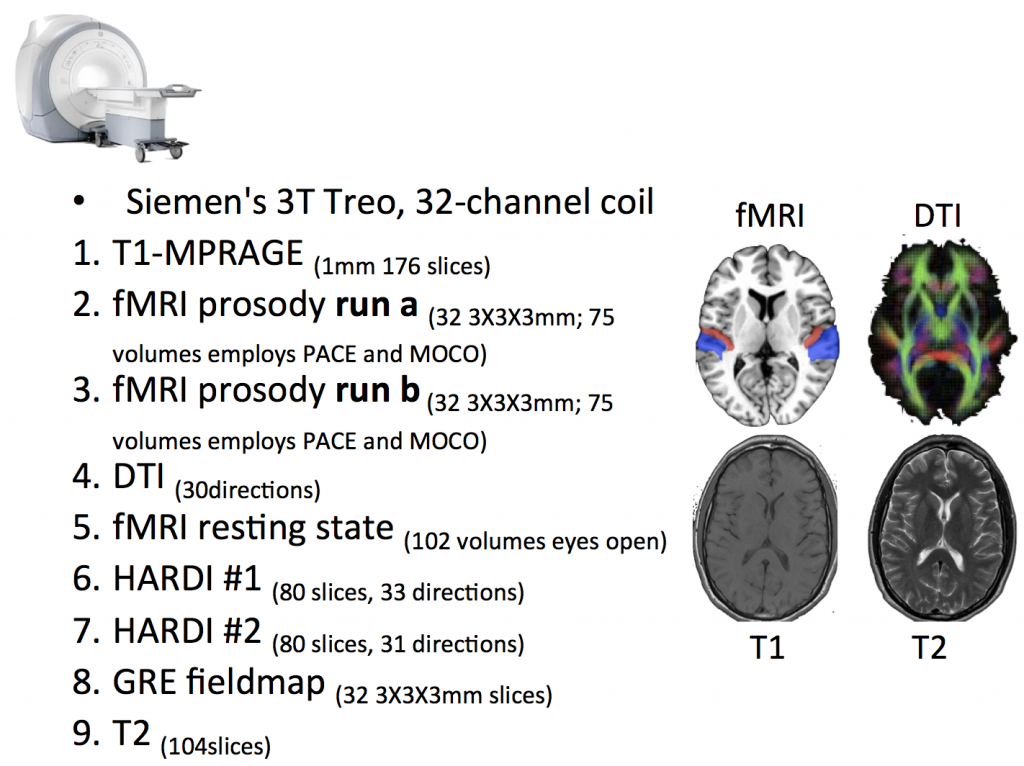 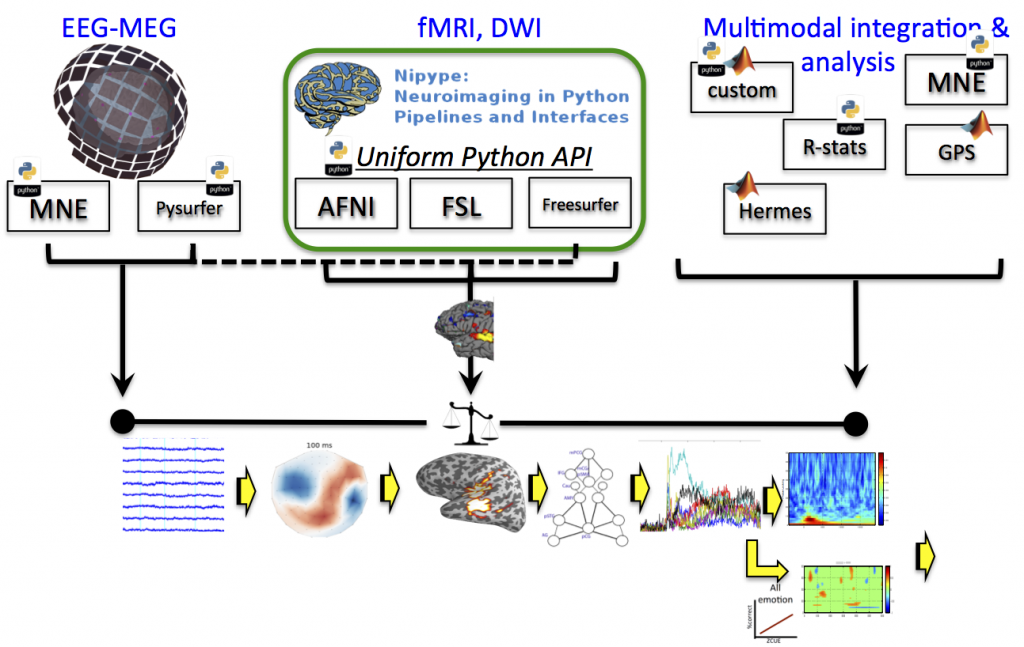 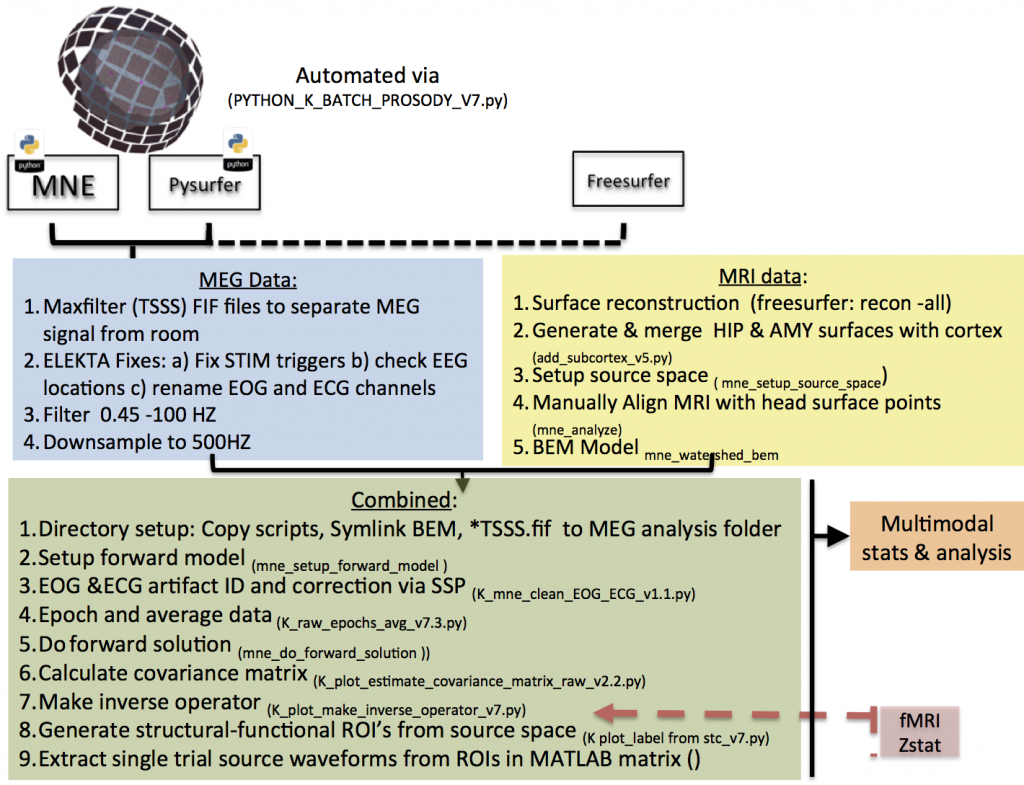 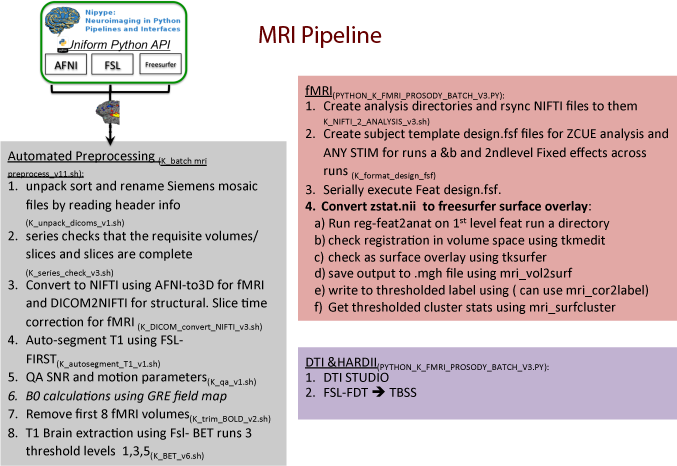 Here, you can see areas of the brain that become active while perceiving prosodic stimuli:

Spotlight on the Amygdala 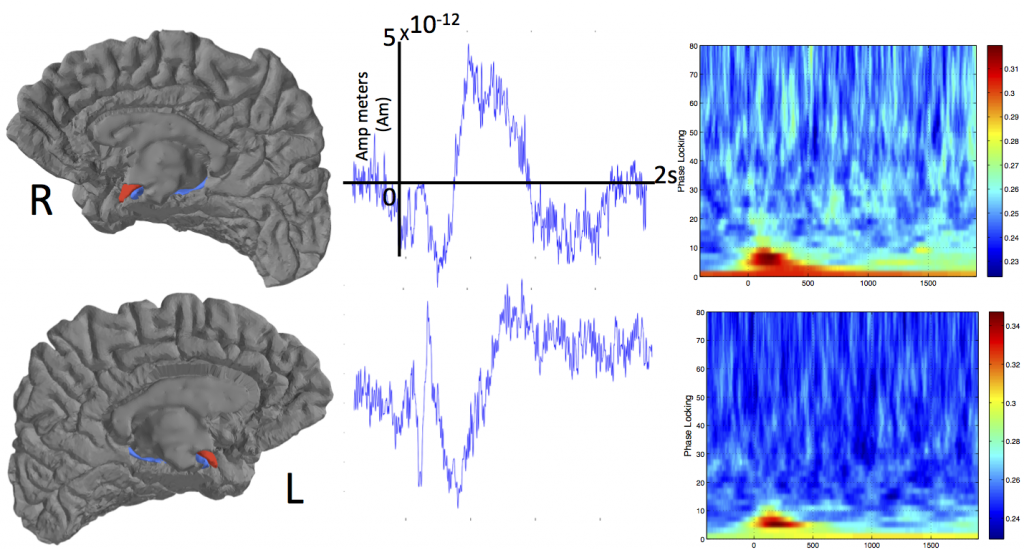 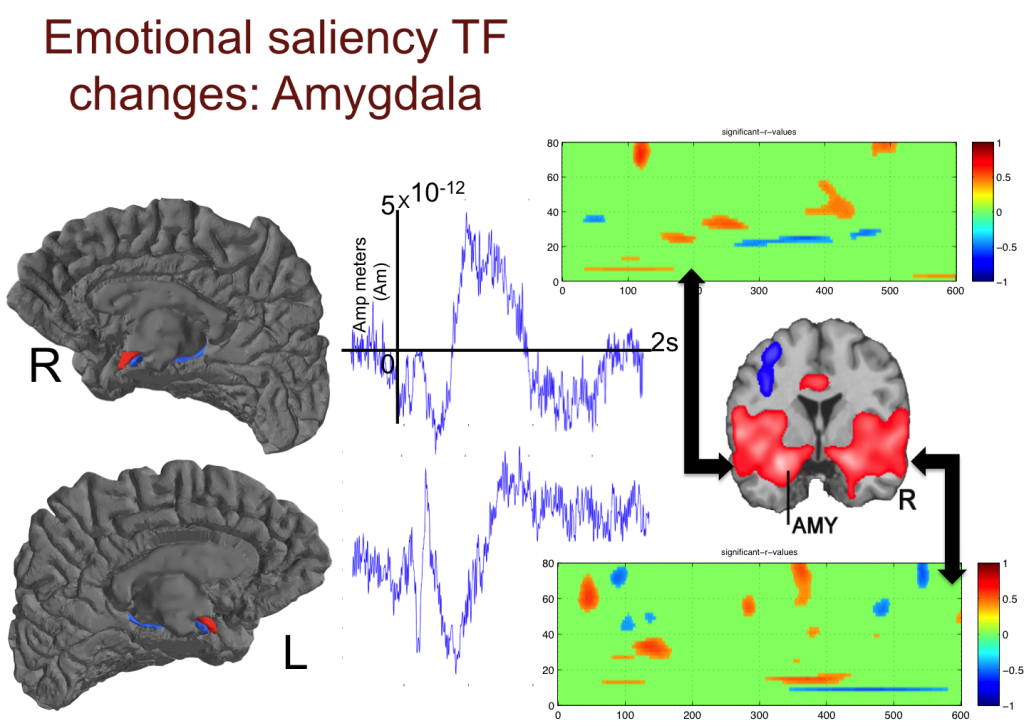 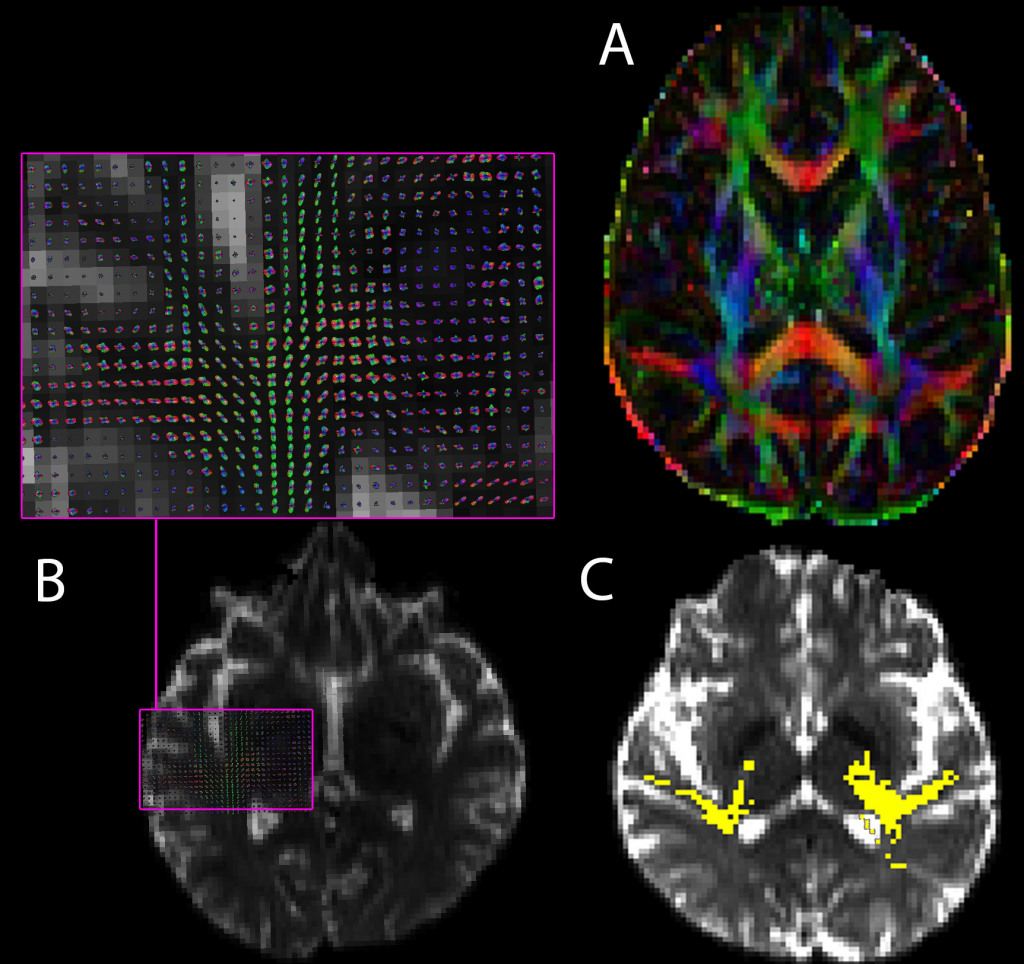 DTI and HARDI (Inset) at acoustic radiations and ILF junction 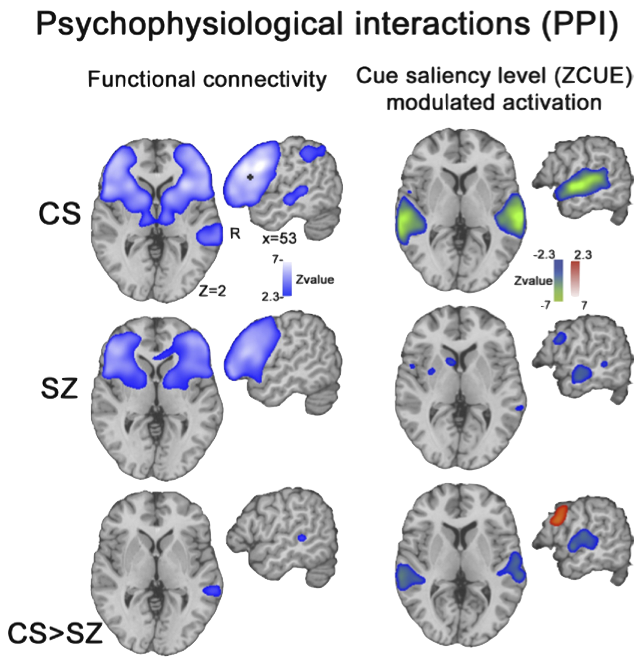 Using the PPI approach  combined Multimodal activations within each ROI of the affective prosodic processing networks(see above) with be used recursively as source and destination seed for probabilistic tractography of HARDI guided DTI data. Measures of Mean and Radial diffusivity as well as Fractional Anisotropy (FA) will then be calculated as a proxy of fiber pathway integrity across subjects. These estimates will then be incorporated in a formal statical model examining their putative influence on oscillatory activity within and across regions.

Using MEG in combination with MRI mapping of white matter pathways, we were able to examine region-region connectivity within the brain in response to prosodic stimuli . This figure displays the group (N=25) within-hemisphere weighted connectivity pattern across the time windows post stimulus onset (PSO). Blue nodes represent control/evaluative processing regions that in prior studies demonstrated increased activity when the paucity of emotionally salient acoustic features made affective prosodic intent ambiguous. Red nodes reflect regions whose activity positively correlated with increasing prosodic signal richness and hence clearer prosodic intent. Edge color represents connection frequency that ranged across all edges, from 5th percentile=11.9HZ, to 95th percentile = 21.1Hz. Relative edge thickness reflects normalized-Z weighted Phase Lag Index (wPLI) magnitude. Group Z wPLI edge values less than 0.5 are held to uniform thickness and shown as threads to further highlight high-wPLI edges of interest. Proceeding from left to right, during the Early time window, bilateral connectivity primarily reflected interconnections between AMY, insula (INS), and STG. Middle and late time windows in the right hemisphere were characterized by increasing centrality of PCC and MOFC, greater PCC-MOFC connectivity, and greater MTG-MOFC connectivity. Finally, in the left hemisphere, temporal cortical and subcortical regions connections to frontal control regions (TRI, IFG, and ACC) were maximal during the early period and then diminished during the middle and late time windows. PCC connections to left AMY and MOFC present during the early window become more robust during middle and late time windows. In the right hemisphere, this pattern was not observed; however, temporal, insular and subcortical regions maintained connections to each other, MOFC, and to a lesser extent, IFG control regions during middle and late time windows.